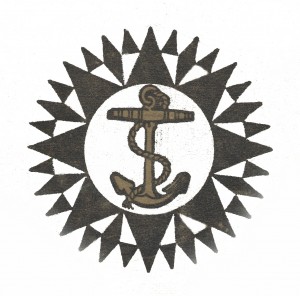 The Admiralty Forecast Section was set up in 1939 and mobilised, purely for an exercise in the middle of August in preparation for the impending hostilities – it never closed for the next twenty eight years, until the whole operation moved to Northwood. By 25 August 1939 the AFS had been mobilised for real in the Admiralty basement soon to become known as the Citadel. The reasoning behind the formation was to have a weather organisation able to give specific attention to the forecast required by the Admiralty, the Fleet and Naval Shore Authorities of the Home Station.
The AFS was responsible for preparing Home Fleet weather messages using data supplied by the Air Ministry network and to issue an analysis of weather to the Home Fleet. Weather shipping forecasts were sent every twelve hours to Naval Shore Authorities. One of the main roles was to compile and distribute weather reports and forecasts for special operations and, along with the Air Ministry Met Office and the USAAF, the AFS was responsible for all the invasion forecasts.
Once the war was over the AFS continued in much the same vein; issuing weather reports and forecasts to Home Fleet shore stations and broadcasting weather forecasts to ships in the Home/Western Fleet area. In addition data was collated from other Fleet Weather Centres to be used, if necessary, on special operations. For a time after the war there were discussions as to whether it was necessary to retain the AFS along with the other Fleet Weather Centres scattered overseas. A decision was eventually made that it was thought to be worthwhile to have these centres able to cover forecasting in much of the world’s oceans.
Always a ratings draft, the Admiralty Forecast Section continued in the Citadel until June 1967 when it moved, with the CinC Western Fleet to Northwood, destined to expand and become a very different centre over the ensuing forty years. The AFS had become a very different entity to the temporary section set up to cover weather in a hostilities situation nearly thirty years before.
In 1962 a new section moved next door to the AFS in the Citadel. This was the Anti- Submarine Warfare Environmental Prediction System (ASWEPS), the forerunner of oceanography. This section was formed under the leadership, initially, of the late Captain Denis Roe OBE as a research and experimental section. Reasonable success ensured that ASWEPS survival and status would expand. There followed a brief argument from on high between the hydrographers and the meteorologists resulting in Met winning the day. Although the hydrographers had more under water surveying experience, it was the meteorologists who had travelled to the United States for a familiarisation course in military oceanography.
Once the AFS moved to Northwood it was not long before ASWEPS followed suit and joined what had become Western Fleet Weather Centre (WFWC) in October of the same year. New Location, new title; for ASWEPS read oceanography, and the rest, as they say, is history.
Bibliography Memories of Capt David Davidge RN Rtd

Diary of the Naval Meteorological Service 1916-1947