Why the Poppy for Remembrance?

Despite the fact that the poppy blooms in late spring and summer it has long been internationally recognised as the symbol of the great loss of life in war, and as such is worn with pride by many during the November Remembrance period. This is the story of why the “Memorial Flower” has come to mean so much to so many for over ninety years. Although so popular as a symbol now, it took three years and more to get the poppy recognised worldwide.

The seeds of the poppy are scattered by the wind and can lie dormant for many years. When the ground is disturbed, as it was on the battlefields, the seeds germinate and the plants grow. The flowers provided a bright, cheerful splash of red on the barren wasteland that passed for landscape at that time and it seemed fitting that these bright flowers should become a lasting symbol of the many lives lost in conflict

“In Flanders fields the poppies blow
Between the crosses, row on row,
That mark our place; and in the sky,
The larks, still bravely singing, fly
Scarce heard amid the guns below”

Taken from In Flanders Fields and written in May 1915

So wrote a Canadian soldier, Major John McCrae after he noticed the bright red flowers springing up around the disturbed earth around his artillery position. These lines have become one amongst so many of the most famous lines written during the Great War and it is believed McCrae composed them following the death of his friend, as he had been asked to conduct his funeral service. 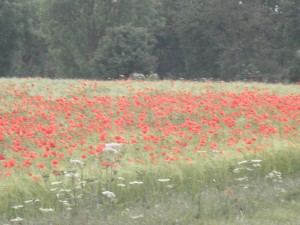 The poppy as a remembrance symbol was the idea of an American woman, Moina Michael, working in New York. Two days before the Armistice in 1918 she came across McCrae’s poem in a magazine; it had a deeply spiritual effect on her and she vowed always to wear a red poppy as a sign of remembrance. After much campaigning the emblem was adopted by the USA in 1919 but struggled to get universal recognition until the following year.

It was Anna Guérin, the “French Poppy Lady” who personally visited Field Marshall Earl Douglas Haig, founder and President of the British Legion, and persuaded him to adopt the poppy emblem for The Legion in the autumn of 1921. The first British Poppy Appeal was launched in the run up to 11 November 1921 with the proceeds going to help ex-servicemen in need of support.

A poppy factory was set up in the Old Kent Road to make artificial poppies to sell in the run-up to Armistice Day. The factory, set up in 1922, could employ five disabled ex-servicemen during the year. By 1933 the demand for poppies had grown to such an extent that the factory was forced to move to larger premises in Richmond Surrey; the really good news being that they were able to employ more men and later women. The factory now produces somewhere near forty million poppies for wreaths sprays and buttonholes.

The white poppy was introduced in 1933 by the Women’s Co-operative Guild, intended as a lasting symbol for peace and an end to all wars. Purported not to be intended to offend the memory of those who died in the Great War, many veterans felt it to be offensive and to undermine their contribution; many still do today. In the 1930’s the issue was thought to be so serious that some women lost their jobs for wearing white poppies. The Royal British Legion refused to be associated with the manufacture and the White Poppy Appeal is now run by the Peace Pledge Union.

Are you aware of the Naval-badged metal poppies available from CQ Cufflinks in association with the RBL.

Not only are they are very good quality and look great, but a large percentage of the profits go to supporting ex-service personnel in need. The company despatches them very quickly, I now have several having ordered them earlier this week, and very much recommend them to all. Please see a few examples below, and the link to the website: