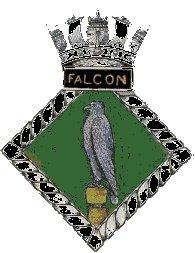 HMS Falcon was transferred from the RAF in 1945 and commissioned in April 1945 as a Royal Naval Air Station; under care and maintenance from March 1965 and paid off at the end of August 1965 whereupon it was immediately transferred back to the RAF. Originally built as a shore base for aircraft of the Mediterranean Fleet and opened in 1923, it was used by the Royal Navy extensively during WW2. Naval flying history in Malta does however actually date back to 1916 when the Admiralty sanctioned the building of a sea plane base, opened as Calafrana, across the bay from Birzebbugia. When the RAF was formed in 1918, Calafrana became an RAF sea plane base.

In 1923 it became apparent that there was a need for an airfield in Malta and the first aerodrome on the island was opened at Hal Far. Used by the Fleet Air Arm, at that time an officially designated part of the RAF, and the RAF from Calafrana; in 1929 Hal Far became an official RAF air base. In December 1936 the sea plane base name was changed to Kalafrana (reason unknown).

During World War 2 Hal Far, run by the RAF, was used by both services in the defence of Malta and was also home to the three Sea Gladiators, Faith, Hope and Charity. The airfield suffered greatly from enemy bombing but was rarely unserviceable due to efficient airfield repair parties. By 1944 and early 1945 RN uniforms had begun to predominate over the RAF, hence the change of ownership in 1945 and the birth of HMS Falcon; chosen for its connection to the Knights of the Order of St John, and a far better title than Hal Far (Village of Rats!). At the end of June 1946 Kalafrana was handed over to the Royal Navy also.

Hal Far became the shore base in the Mediterranean for carrier-borne aircraft, with Kalafrana being a holding unit for spare planes, particularly during times of conflict such as the Korean War. When the replacement of piston engine planes with jet aircraft took place most carriers undertook their workup within diverting distance of Hal Far. All this activity meant that the runways needed resurfacing, necessitating the airfield being closed for three weeks in the autumn of 1954 and throughout 1955 a programme of rebuilding continued.

The Air Division of the RNVR migrated annually to Hal Far for periods of intensive flying uninterrupted, as they would have been in the UK, by the British climate. In 1956 Hal Far played a very large part in the Suez Crisis, operational FAA squadrons moved out and were replaced by Canberra’s of the RAF who flew night bombing sorties, the airfield also became a drop off point for replacement carrier aircraft to be ferried to the front line.

Back to normal in 1957 meant that it was time for the accommodation blocks to be extensively rebuilt and, for a while, to be a civilian airport as the runways at Luqa were being resurfaced. In October 1958 the first Commando helicopter squadron was formed at Hal Far, and in October 1959 the Observer School moved to Malta from Culdrose and conducted its training there until moving to Lossiemouth when Hal Far closed. Until the end of August 1965 when the air station was transferred back to the RAF, Hal Far continued in its role as a shore base for aircraft from carriers operating in the Mediterranean along with training FAA Observers and providing aircraft for various Fleet requirements.

Being a busy RNAS, Hal Far needed a good supply of meteorologists to staff the tower and the Mediterranean Fleet Weather Centre. The offices were staffed mostly but not exclusively by wrens, indeed this was the only overseas draft for them in the 1950’s and early 1960’s, but at PO and Chief level it became a male draft as there were not enough wren senior rates to go around

Brian Collins was a Killick Met in 1958, he was drafted to Halfar 1958-1960. Brian tells us that G A Bell, Bryn Telfer, John Randel, Pete Rossington, Dereck Marshall were some of the ratings that were also there during that time. The American base was down the road going towards Birzebuggia and they used to get all their flight briefings from us.

Brian trained at Kete in 1956. Pete Rossington was the kellick there at that time. The male ratings were outnumbered by Wrns, something like 2 to 1. You didn't have to wear your hat unless there was a reason to do so Divisions on a Friday was to the accompaniment of a record playing. The roofs of buildings were held down by ropes tied to metal spikes either side of the building.

On completion Brian joined the cruiser HMS Superb at Chatham, that went to the East Indies and was involved in the Suez Crisis The MET officer on board was LT Cdr Adams. Brian returned to Kete again at the end of 1957, that was when they were wanting ratings to change from other branches to MET.

All this history came about because the Halfar page contained errors which just goes to show how important it is to record facts before they are lost. If you have an anecdote about the branch then please get in touch. We do not guarantee it will be published, indeed some of the best material is from someone called anon. When we ask questions about the Met Branch the usual reply is...We were going to ask you!