In October 1946 the first real Met School was opened at HMS Harrier, RNAD Kete on the Pembrokeshire coast near Dale. The first course was for forecasters who, being part of the Education branch became instructors, although not necessarily specialising in met. Until the school opened all officers had done their met training at Royal Naval College Greenwich from 1940. When the school first opened it was staffed by just three people; the Officer in Charge who was Instructor Commander A R Edwards, ably assisted by one of our members, PO Wren Elizabeth Dear née Baldwin and AB (Met) B L Morris, soon to be promoted to L/Seaman (Met). This first forecasters course (M0), lasted for three months and was the last course to take midshipman (five in total). Inst. Cdr Edwards was to remain as OIC until January 1950 and Elizabeth remained until 1948 when she married Inst. Lt Arthur Dear, a course member on M1, proving that it wasn’t just a rumour that Kete was known as the ‘Marriage Bureau'. 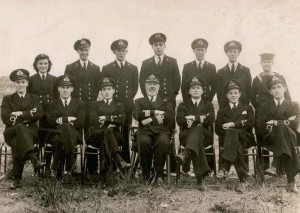 Elizabeth instructed on the officers courses until wrens and ratings courses were transferred from Lee-on-Solent in 1947. At this point she assumed the position of I/C of all wrens and ratings courses; they were mixed courses and appear to have lasted for approximately two months. There are two points worth noting, Elizabeth Baldwin was the first PO Wren Met and she is also still the ‘pin-up girl’ at the school in Devonport today. 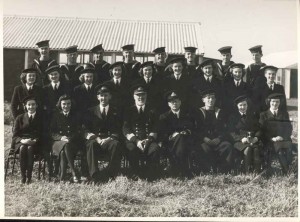 According to one ex met rating who twice spent time at Kete in the early days, it was a much more relaxed establishment the first time he was there doing his met training. The second time around, drafted in to plot for an officers course, life there had become very much more “pusser”; classes were marched from one session to the next and officers had to be saluted, in other words a real training establishment. (It was the RP School as well!) Nevertheless most of those who went to Kete seem to have enjoyed their time; no doubt this was enhanced by regular trips to the Griffin hostelry in Dale.

Met training continued at Kete for about fourteen years when, in stages, it was moved to another new school. This time met training was to be based at RNAS Culdrose in Cornwall, with the ratings moving first in 1959, followed by the rest of the school and officers courses in 1960.

Officers in Charge of the School of Meteorology