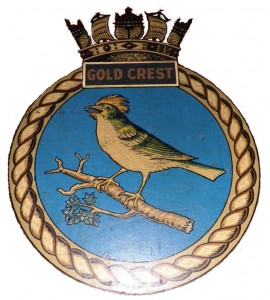 RNAS Brawdy was originally an RAF Station situated above St Brides Bay on the south west Pembrokeshire coast. It opened in 1944 and was a satellite for RAF St David’s, operating a Meteorological Squadron using Halifax bombers. In January 1946 Brawdy was transferred to the Royal Navy to become a Royal Naval Air Station.

Brawdy was originally known as Goldcrest II as it was a satellite of Goldcrest (RNAS Dale). Transferred from the RAF on 1 January 1946 the station went into care and maintenance in March 1948. Goldcrest II also included a relief airfield at St David’s lent by the RAF from 1947-1961. HMS Goldcrest at Brawdy was finally commissioned in September 1952 when it came out of care and maintenance, going into reserve in 1960 for runway extension and reopening in April 1963 before finally paying off in April 1971.

Whilst a satellite of RNAS Dale, for a short time it housed the Pilotless Aircraft Unit from RAE at Farnborough and 811 Squadron, the only ever Sea Mosquito Squadron. When Brawdy re-commissioned in 1952 it became a full air station and formed part of the Home Air Command, Flying Training Sub-command FAA. The commissioning ceremony took place on the square outside the HQ with 35 Officers and 300 Ratings taking part. The Admiralty had stated that a considerable amount of rebuilding would have to be undertaken before it was ready for full operational use. They hoped eventually to make Brawdy one of the most important and up-to-date NAS in the country with a capability to operate jet aircraft.

Rebuilding began in 1951 and was not completed until 1955; it included resurfacing runways and the installation of full airfield lighting. The control tower needed enlarging and modernising, also extra hardstandings and hangars needed to be constructed along with other extra workshops and buildings. Along with the working buildings, by 1956 improvements had been made to the domestic accommodation including a new Wardroom, Chief’s mess and PO’s mess. Improvements were also made to the Junior Rates accommodation, the dining hall and NAAFI.

From its inception, Brawdy was constantly in use with newly formed squadrons working up as well as embarking and disembarking from Fleet Aircraft Carriers, not to mention the change during the early years from piston-engine to jet aircraft. The Air Station staged its first Air Day in July 1953 which became an annual event to attract the crowds in the holiday season.

In 1956 the first resident naval squadron took up their post. 727 Squadron was formed to provide air experience to cadets from BRNC Dartmouth and in 1958 when St David’s airfield closed, the intercept training missions flown for HMS Harrier by Airwork Services Ltd moved to Brawdy. The company also ran conversion courses for pilots on Mosquitoes and Jets. At the same time all modernisation came to a halt as Brawdy’s future was under review with plans to concentrate the FAA into just three home air stations. Brawdy escaped and by the mid 1960’s became the base for Advanced Flying Training in addition to taking over the frontline aircraft holding task from RNAS Abbotsinch.

Yet again, between 1961 and 1963 the station was modernised; including the lengthening of the main runway, extra ratings accommodation and a new block for 200 wrens, three new interconnecting hangars and a technical block. Between August 1963 and December 1964, three squadrons took up residence- 759 Squadron with dual-control Hunters, 738 with single-seater Hunters from Lossiemouth and 849 with Gannets from Culdrose.

Along with the requisite SAR Flight, the people complement was some 1,750 officers, ratings and wrens.

Never far away was that dreaded phrase ‘cut backs’ and it was announced in 1969 that Brawdy would again revert to the RAF. The airfield closed on 1 December 1970 and was handed over to the RAF on 1 April 1971 from whence it had been obtained twenty five years previously. This change was not to be the last, with the Americans occupying the site for a while, and now an Army signals regiment are tenants with part having been sold/let out as an industrial estate. The MOD recently announced its intention to close Cawdor Barracks in 2016