The History of Weather Ships

On Saturday 22nd March, I traveled to Birmingham to attend a Royal Meteorological Society meeting on The History of Weather Ships. Most, if not all, will remember the weather ship plots on the various charts and will even recall their locations. Some of you will recall being sent on trips on weather ships in the 1960's to do Oceanographic Work and I am sure that George Clevett among others could expand on the details of the who, where, when and why in greater detail. Gearge was, as I recall, in Asweps at the time, fresh from his time in Victorious?

I did two 1960's trips on the UK Weather Ships, the first on Weather Surveyor to Juliett (I think) and the second on Weather Monitor to India. The first trip I recall as being wall to wall sunshine and frolics, the second as some of the wildest weather that I have ever endured (survived) in a ship. There is also some memory of a lively run ashore in Glasgow - but I digress! 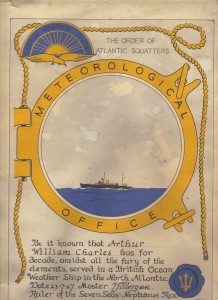 I thoroughly enjoyed the meeting which was very well attended. The room was full of weather ship memorabilia and during proceedings a group photograph of all those that had served in Weather Ships was taken. Yours truly got in on this act. 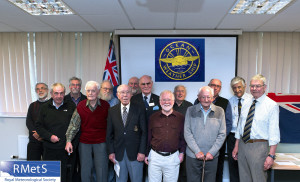 If you have an interest in the Weather Ships then I would wholeheartedly recommend visiting the Weather Ships website where you will find a picture of RJ Blackie Howarth at work on one of the vessels. As far as I know this is the only picture of Met Ratings on these ships but would be delighted to show more on these pages if photographs came to light.

If you are a train Anorak then my video of the journey can be found on Youtube in the usual place.