HMS Illustrious has arrived in Rosyth to take part in the HMS Queen Elizabeth naming ceremony. The ship had to negotiate a very narrow entrance to the basin at Rosyth Dockyard, before entering the dock right beside HMS Queen Elizabeth. This is the first time that the two generations of aircraft carrier have been together. CROWN COPYRIGHT 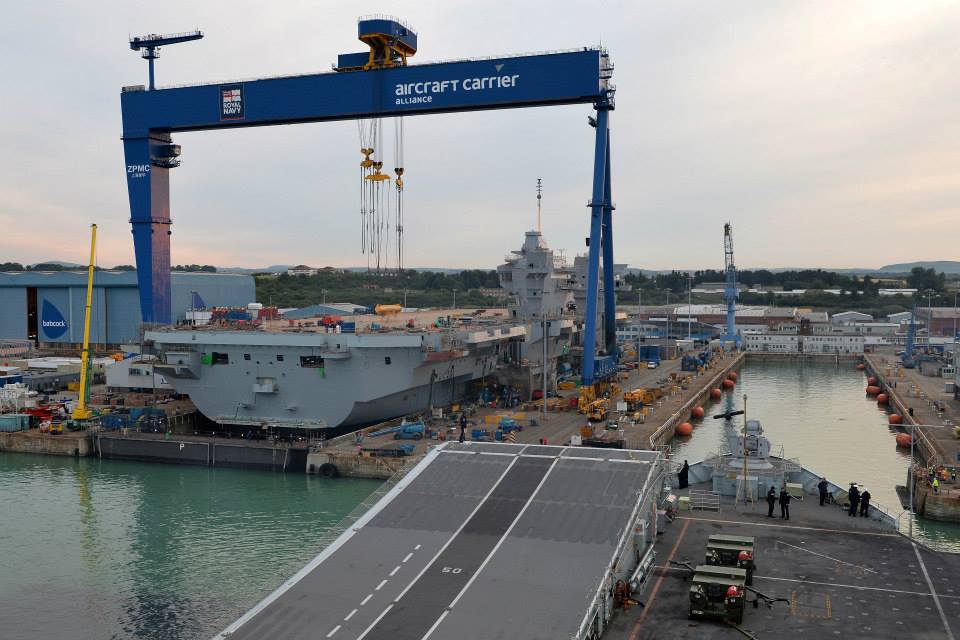 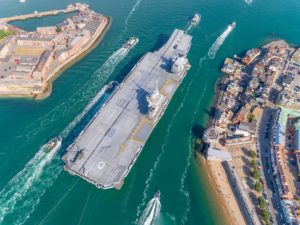 Somewhere off the Eastern Seaboard of the United States, Leading Seaman Paul Allen holds a ‘kestrel’ environmental recording instrument, watched by Lt Anna Townsend and a US Navy sailor on ‘vultures’ row’, six decks above the flight deck of the USS Harry S Truman. 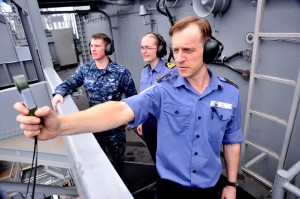 The two expert Royal Navy meteorologists have joined the giant American flat-top for three months to learn about forecasting aboard a ship five times larger than the UK’s own carriers.

Their stint aboard the 100,000-tonne leviathan, currently undergoing training in the Atlantic, is another piece of the huge jigsaw preparing the Royal Navy for the two largest ships it has built – future carriers Queen Elizabeth and Prince of Wales.

There are clear differences in the size of the ships, the technology used, training and doctrine in the two navies.

For example, the US Navy produces a main 72-hour forecast to a range of 50 nautical miles from the ship, whereas Royal Navy forecasts look at the next 12 hours – but to a distance of 100 miles.

For any carrier operations wind over the deck is vital for launching and recovering aircraft – typically 20 to 30 knots aboard the Truman. For safe operations there must be a minimal crosswind – and a roll of no more than two degrees.

Unlike her US counterparts, the warfare officer training Lt Townsend has received means she can not only provide forecasting for carrier missions, but also assist with mission planning, focusing on how an aircraft’s sensors and weaponry will perform to and over a target area depending on the weather conditions. 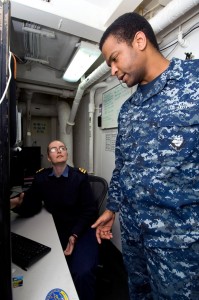 “This has been an excellent opportunity to see how the US Navy provides hydrographic and meteorological support to strike operations and will definitely assist me in the set-up and execution of operations on the Royal Navy’s future carriers,” says Lt Townsend of her experience aboard the American leviathan.

She has recently returned from the Gulf where she provided expert advice aboard HMS Daring and Diamond – which both worked with US carriers during their deployments in the region.

LS Allen can call on almost 20 years’ experience as a meteorological observer ashore and afloat. Always in search of his next cup of ‘proper English tea’ he has proven to be an instant hit with his USN compatriots.

He’s, unsurprisingly, been struck by the sheer scale of the Truman – the third youngest of the US Navy’s ten Nimitz-class super-carriers.

It’s home to 5,500 sailors and air group personnel – supporting up to 90 aircraft and helicopters; compare that with the Queen Elizabeth class which will be two-thirds of the size with 1,600 personnel aboard and 40 or so F35 jump jets and helicopters.

Living arrangements aboard the Truman are much the same as in 20th-Century Royal Navy ships with the enlisted sailors (ratings) in 30 to 100-man messes and officers are in one to four-man ‘state rooms’ (cabins). Food is very different in that it is in a canteen style in all messes.

“Berthing and messing arrangements are on a large scale but then you have to cater for 5,000 people,” says LS Allen.

“At the end of the day you are here to do a job and that is to provide forecasting support to naval aviation and operations in every way you can.” 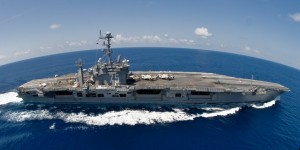