With the up and coming placing of the Cloud Observers Crest on the FAA Memorial we felt that it was about time the story behind the origin of the crest was revealed. This has proved to be no easy task and has had rather a strange outcome. It would appear that the Branch tie came first then the crest! The Royal Naval School of Meteorology (RNSOM) became the Royal Naval School of Meteorology and Oceanography (RNSOMO) in 1968, although the Directorate had formally recognized oceanography two years previously in 1966.It was in 1968 that the then Director Captain John Booth RN and his team decided to produce a branch tie, originally for forecasters, but later offered to ratings as well. Captain, then Commander, Derek Blacker RN agreed to come up with a design for this and using the met. symbol for a thunderstorm he extended the front leg so that it penetrated the waves to represent the oceanographic element and topped this with the Queen’s crown as used on a naval officers tie.

It was not until 1976 that the crest began to appear elsewhere, mainly on paper, usually handouts for the various met courses run by the school. This was designed by the late FCPO(A) Tony Bell, who put his talent as a very precise doodler and cartoonist to good use. It must be assumed that the idea came from the design for the branch tie; what is known is that the rope work and waves

came from the Seahawk crest. It should also be noted that the thunderstorm symbol no longer goes through the waves but rests on the surface. Research has revealed that the crest only ever appeared on paper with one exception, as far as is known, and that was the first, let us call it the prototype, which was made and presented to Commander Peter Rogers RN, by Collis (Ginge) Barker when he left his post as CO of the school in the early 1980’s.

Before leaving RNAS Culdrose the school changed its title in the late 1990’s to the RN Hydrography, Meteorological and Oceanographic School and the crest went from circular to diamond in shape and, much more important, was the extension of the thunderstorm symbol to penetrate the sea again, just as it had done in the original design. When the school moved to Devonport in 2003 the

original crest became redundant until the association adopted the same some two years later, and the rest as they say is history. The school meanwhile now uses the hydrography crest. We have adapted the crest to make it peculiar to us by replacing RNSOMO on the neck of the crest with Cloud Observers, whilst all our stationery uses the symbol going through the sea . 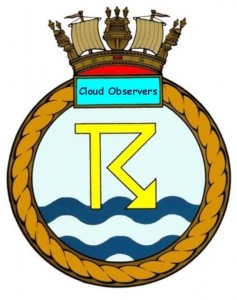 With thanks to the late Peter Rogers we are now able to show you the only manufactured RNSOMO crest which he has very kindly photographed for us. 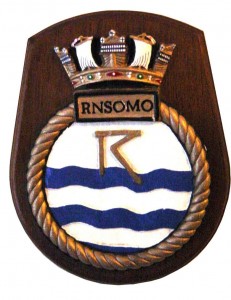